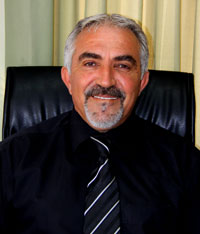 He was born on April 12th , 1962 at Larnaca. He graduated from Bekirpaşa Lycee. He successfully completed his military duty at G.K.K Banda part.

He took place as an active footballer successfully at Genclerbirligi Sports Club for 20 years.

He was also one of the footballers of TRNC national team. He performed in several sports club as a trainer for 15 years.

He had worked as a municipal officer since 1989.Recently, he is working as Municipal Manager.

He is married and father of 3 children.