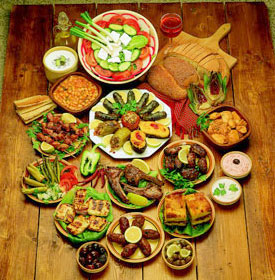 Cypriot cuisine has been influenced by different cultures throughout history. Each dish has a unique taste and is well presented reflecting the Cypriot character.

Molhiya, Arab in origin is a well developed dish appealing to Turkish Cypriot taste, preparation and presentation, since there were Arabs who passed it to Turks. A few traditional dishes: Yalanci Dolma (vine leaves stuffed with rice, onions, and tomatoes) is a Turkish Cypriot dish. In Turkish Yalanci Dolma means "stuffed liar". Derived from common dolma that is filled with meat, Yalanci means "cheat/liar" which signifies the meat is missing. You can encounter with Dolma and Sarma in Serbia, Croatia, Bulgaria and other Balkan countries of a former Ottoman Empire; Sish Kebab (marinated lamb, skewered and grilled over charcoal), shis is the everyday word used by Turkish people which refers to "skewer", similarly Doner Kebab means "spinning kebab"; Musakka (layers of mince, potatoes, and aubergines baked in the oven with cheese topping), Greek in origin. Many dishes vary from region to region making Cyprus a fascinating place to eat.
hellim 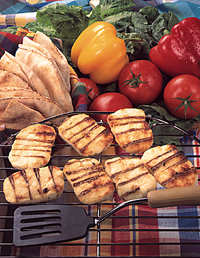 The Turkish-Cypriot cuisine owes its heritage to a mixture of Mediterranean , Southern European and Middle Eastern influences. Local dishes are delicious, particularly the meze . This is a specialty of Cyprus and consists of a large number of cold and hot hors doeuvres such as different salads, meats, vegetable, and fish dishes. It is taken either as an appetizer or a main course.

Among some interesting dishes that can be found in Cyprus belongs kolokas , a root vegetable which when cooked has a texture of potato, with sweet taste. What is extraordinary about this dish is that it is not of Turkish or Greek origin, but was brought to Cyprus Island by Venetians who came to Cyprus prior to Ottomans. Due to etymological meaning Colocasia esculenta means "elephants ears", because that is what the leaves of plants look like. Kolokas is usually served with chicken or lamb.

Yoghurt plays an important part in Turkish life. Thick and creamy, it complements meats and vegetables, is added to sauces, kebabs, salads, and cakes. Very young babies are soon weaned onto yoghurt which is as important as their mothers milk. There is nothing more refreshing than to pause from the bustle of the market place for a cool ayran yoghurt drink on a hot day. Make your own by diluting yoghurt with a little water and ice; add a dash of salt and a sprig of parsley. 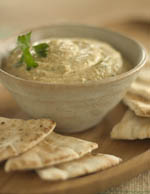 It is always a pleasant attraction to visit the market in Nicosia. Noisy, bustling crowds of shoppers and vendors browse amongst the stalls and barrows piled high with the freshest fruits and vegetables; for the most part organically grown by the villagers themselves. Dafry products, huge sacks of flour, wheat, rice (brown and white), and pastas also abound. White cheese (beyaz peynir), goats cheese (hellim), olives, honey, and all the natural wholesome foods which make Turkish cuisine 80 delicious are brought to market from the villages on Fridays.

Hellim cheese, or Halloumi, as it is also known, is the most unique of the Cypriot delicacies. It is full fat soft cheese made of whole goats milk, salt and a hint of mint. You can buy packaged halloumi at a local Middle Eastern grocery. Dice into small cubes for salads or serve with biscuits, cucumber or melon. It also makes a superb side dish, as well as fried or grilled topping.

The Turkish coffee has been introduced to the West by the Ottoman Turks in the fifteenth century. It is very popular all over the world today and is preferred as a delicacy in most fashionable circles. The secret of making Turkish coffee is that the coffee beans are ground into a fine powder and then it is cooked together with sugar producing a thick cream on top. Turkish coffee is served in small coffee cups, and in three ways, called sade , which is unsweetened, orta , which is moderately sweet, and sekerli , which is very sweet. One is always asked before the coffee is brewed which of the three one would like. 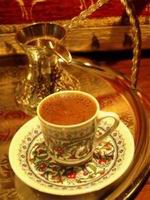 The coffee should be ground just before it is to be made, and it should be as fine as possible. Put one dessert-spoonful of the powder into a small pot with as much sugar as you like, and add one demi-tasse of boiling water. Allow the coffee to boil up and then immediately remove it from the heat. Repeat this process three times, and pour it into the coffee cup. The grains must be given time to subside in the cup before you can drink the coffee and it is helpful to stroke the froth in the cup gently as you wait. Turkish coffee is usually served with a glass of cold water, and it is the custom to take a sip of water after drinking coffee.

When the coffee is finished quite a lot of black sediment will be left in the bottom of the cup, and a favourite Turkish pastime it to tell fortunes in the grains. The ladies are especially good at this. You are asked to tip your cup upside down on the saucer, so that the grains can run down the sides of the cup forming patterns. After a suitable pause, the cup is scrutinized by the expert and your future is revealed. Some of the predictions are highly amusing, some sinister and ominous!